In September 1989, the University of Lethbridge looked quite a bit different than it does today. The Students’ Union Building had its sod ceremoniously turned that year, Turcotte Hall was under construction, and the then School of Management had just reached Faculty status. The Pronghorn was adopted as the U of L mascot, and computer training sessions were being advertised in Aperture Weekly to help faculty and staff learn how to use an IBM-PC microcomputer and learn MS PC-DOS. September of 1989 also saw a group of employees get together for what would become an almost 30-year tradition.

Dress Club or Clothing Club, depending on who you ask, is a group of 12 women (plus or minus a guest or two) from various departments across the U of L, past and present. Each month, this group of ladies get together at a selected member’s home for what can only be described as hilarious, chatter-induced, food and wine fuelled therapy. The host provides the wine and the setting and the rest of the group comes with food in-hand. Each member throws $20 into the kitty and the next host gets to keep the collection with the proviso they spend the money on something special for herself.

The membership has changed over the years as people come and go from the University and the city, but the sentiment remains the same; to have a laugh and support each other.

“Originally we started the club as a way to take some time for ourselves, away from work, husbands and kids and to get a new outfit,” says Deb Bullock (President’s Office). “It was really hard in those days to scrape together some cash for a new dress or shoes or anything for yourself really. The idea was that at least once a year, you’d have $240 to splurge on some new clothes and to make yourself feel special.” 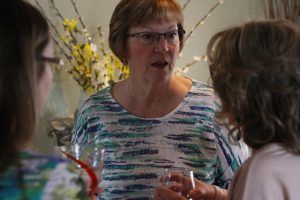 “When I first started at the U of L, I was the solo IT technician,” says Kathy Lee, retired help desk manager. “At the time, there were just four word processors in total and they were all located in the president’s office. As technology progressed, so did the troubleshooting! I would go from office to office fixing issues which is how I connected with these ladies,” she says. “I’d chat away with the gals as I was working on their computers and eventually we became friends and the idea of Dress Club came about.”

While the purchasing of new outfits went by the wayside and the months rolled on, the club became so much more to each of its members. 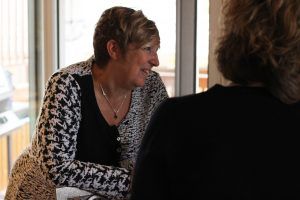 “We’ve been through all of life’s ups and downs and we’ve been through them all together,” says Carol Van Dyk (Management). “Our club is almost an equal split of retirees and current employees, regardless of what’s going on or where we are, this group is priority for all of us and that’s something pretty special.”

For recent retiree, Gerda VanderFluit, the club has what she describes as a ‘magnetic pull’.

“When my mom passed away, I really didn’t want to come the week that we’d scheduled to meet. I was so sad and so exhausted but my husband said, ‘Go to your girls; they’ll lighten the load.’ And they did,” she says.

“Dress Club gives me perspective on life and on work,” says Anita Ryder (BMgt ’94, BEd ’89) (Management). “It really helps you to pull out of whatever tailspin you’re currently in.”

There are no terms of reference for this club and there is no end to what they will do for one another. Recently one member looked after another’s son while her husband had been gravely ill in hospital. The group cooked meals upon meals for the family and they never ask what they can do for a member in need, they just do. 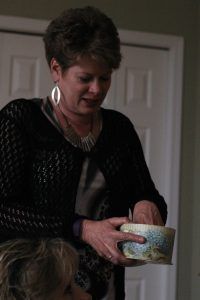 The most recent Dress Club saw the celebration of the recent retirement of Kathy Schrage. There was the reflection of how old member’s children were when they first started. Cathy Kanashiro (BMgt ’91) (Arts & Science), was either pregnant or had recently had her first baby girl when she joined. Her eldest is now 19 years old.

There were stories from recent trips to Mexico, hilarious anecdotes from Easter egg hunts gone wrong, the impending excitement of grandchildren coming into the world and the latest from around campus.

The club has even inspired others to create a gathering of their own. Whitney Bullock (BMgt ‘09), has established her own club with a group of friends who closely follow the model set by her mother’s group. Except Deb says it’s simply named, ‘Club’. 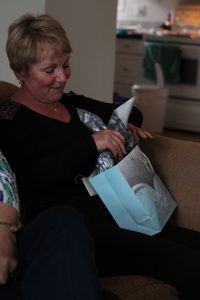 After 28-years of meeting every month, the group shows no signs of closing-up the clubhouse yet.

“I’d be lost without my ladies,” says Kathy Schrage. The sentiment is echoed around the room.

“Even if you feel like you don’t have time, you make the time for Dress Club,” says Marg McKeen.

“We come in, we sit down, we chat, we eat, we drink, responsibly of course!” says Gerda. “And then we’re out in three hours or less! We love each other, but we’re still efficient with our love,” she quips.

If you’re ever invited to be a ‘guest speaker’ at Dress Club, accept the offer with great gusto. From the moment you enter the door, you’re welcomed with open arms, a flurry of food and drink and an endless stream of hilarious, quick-whitted tales.

When it came time for Fred to start his post-secondary education, he packed his bags for another adventure and found himself at the University of Lethbridge.

As the student athletes on campus have wound down and finished their seasons on the court, ice and track, there are two teams who have been ramping up their training in preparation for their biggest competition yet.