If you’ve been to any University of Lethbridge event in the last three decades, you would have more than likely set eyes upon alumna and University Senator, Karen Johnson (BMgt ’86). Karen wears her blue and gold pride loud and proud on her sleeve. She’s involved in almost more southern Alberta communities and committees than there hours in the day. Giving back and building connections is who she is.

“I moved to Lethbridge with my childhood friend and fellow alumna, Deri Latimer (BMgt ’84), from northern Manitoba. When choosing a university, I wanted to attend a place that still made me feel part of a group but was big enough where I could find new experiences. The University of Lethbridge was the perfect choice, although it was still pretty scary moving to what we thought was the ‘big city’.

What I found the most comforting about my experience as a student at the U of L was how I could go and talk one on one to my professors and classmates and they’d know who I was. I wasn’t just another face in the crowd, I was Karen who’d moved from Manitoba. It made navigating the stresses of classes and exams much more manageable.

While I was studying I worked at the Students’ Union pub which used to be located in a trailer. During the week, from Monday to Friday, the trailer was a daycare and then on weekends it turned into the SU pub. Hilarious to think of now looking back on it, but that’s just what we had to work with at the time.

One of the biggest reasons I started working at the SU pub was to meet people. I remember thinking, ‘if I sit around waiting for an invitation to make friends, I’m never going to get one so I’ll just create one for myself!’ So I did and some of the friendships I formed during that time are still with me today and something I cherish.

I guess that is kind of why I love being involved in lots of different groups. I really enjoy meeting new people and helping them to build their own connections because feeling isolated is such a lonely place to be. If I can reach out to just one person and brighten their day in someway, I know I’ve made a positive difference.

I am involved in a variety of groups and organizations in southern Alberta which I think is why I enjoy it so much. From the Lethbridge Community Taiko Association to the Rotary Club of Lethbridge Sunrise, the weaving guild at CASA, Runners Soul Race Association of Southern Alberta to the Dragon Boat Association of Southern Alberta. Each group is very different which keeps it fun and interesting! I learn new things and meet new people all of the time which has also encouraged my love of travel. So far I’ve visited Iceland, England, Portugal, Mexico, Costa Rica, Panama, New Zealand and several states in the U.S. 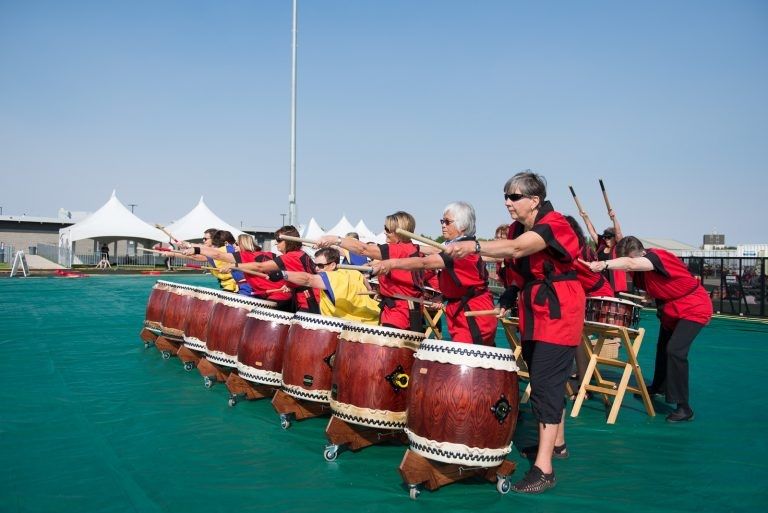 I’ve recently retired from my 30- plus-year career at the City of Lethbridge as the financial and administration manager for community services. I started at the city while I was at university to pay my way through school. I worked as a cashier at the rink, at the pool and all over the place. Eventually I was offered a full-time position in my field of study and I was fortunate enough to move around a lot of different departments and areas during my time there.

Now as a University Senator, I feel it’s a role that has taken my degree full circle. I’ve always been an ambassador for the University but now I get to do wonderful things like go out to rural communities and talk to school students. We go in and talk about Convocation with the Chief Marshal who is dressed in full regalia. Students are so inquisitive and engaged with the whole process because they’ve never seen anything like it before; it’s a lot of fun.

I would have to say Convocation is one of my most favourite events to be involved in. I love volunteering for it! Your own convocation can be quite overwhelming because you’re just so relieved to be done and be there getting that piece of paper. You may not fully realize what it means or fully understand what is going on. Seeing convocation now, you know so much more and understand the whole ceremony of the day. Watching my own son, Michael Collin (BSc ’15), walk across that stage was just brilliant. I felt so much pride being an alumna, a Senator and most importantly, a proud parent. 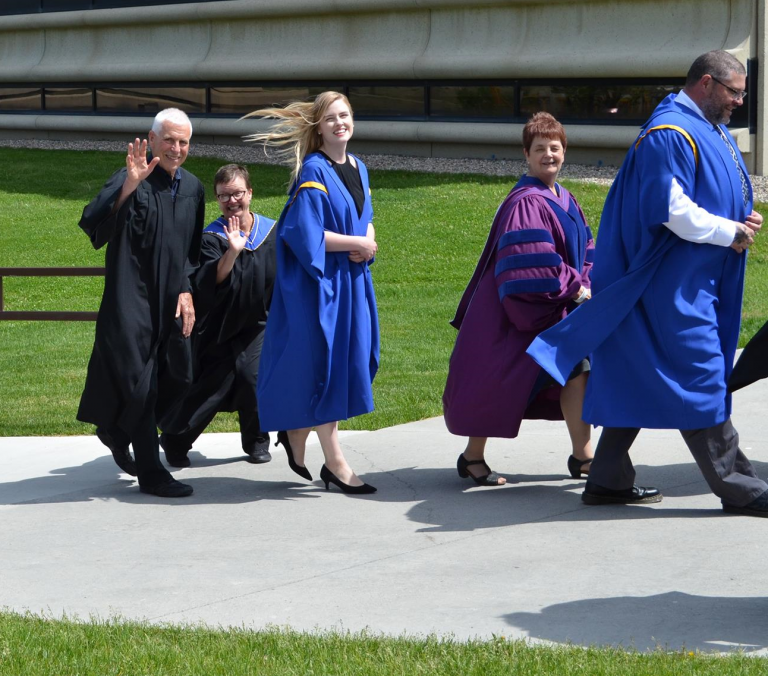 I wouldn’t be able to contribute to my community anywhere near the level of what I do if I hadn’t come to the U of L. It made me who I am as a person. I was successful in my work life because of the skills I learned in the classroom, but I know I’m successful in my personal life because of what I learned as a human being at university. Giving back and contributing to the greater good is what it’s all about.”

When you enter the University of Lethbridge Pronghorn Athletics offices, the bright smile of alumna and staff member, Brittney Nyrose (BA/BMgt ’12) will be there to greet you.

A witness to the evolution of campus as both an undergrad, graduate and post-doctoral student, Andy brings his passion and enthusiasm for teaching and asking ‘what’s next?’ into the classroom.