When Students’ Union Vice-President of Operations, Michael Gale, crossed the stage last week to receive his Bachelor of Science, it also signified overcoming adversity. Many on campus would recognize Michael for his well-kept beard and incredibly friendly demeanor, always willing to help in any way he can. An active member of the Kappa Sigma fraternity, a vocal supporter of many local volunteer organizations and an almost permanent installment at any and all University events. It’s surprising to then learn that on top of his many commitments, Michael has also had to find a way to pull through more struggles and hardships than most on his journey to higher education.

“I grew up on a farm, north-west of Calgary and was diagnosed with a learning disability early on in life. I was in a supported learning class from grades one through to 8 with the same five kids, an advantage of growing up in a small town I guess. Our class had learning disabilities ranging from autism to cerebral palsy, so there was a wide spectrum of needs. We grew to be a tight knit group and I am still proud to call them some of my closest friends.

“When I got to high school, I just wanted to fit in, I didn’t want to be singled out for being different, so I declined to receive support for my disability and it made things a lot more difficult than they had to be. I made it through high school and decided to work and travel after graduation. Rather than head off to Europe or Asia like a lot of people, I decided to explore my own country. Canada has so much to offer and I got to see a good chunk of it during my gap year.

“I first arrived at the U of L in the fall semester of 2008. I’d enrolled in a Bachelor’s of science combined with education. I had some really amazing teachers who made a significant difference in my life so I wanted to give back to that profession. I lived in residence in UHall and then in my second year I moved into Piikani before moving off campus for the remainder of my education.

“I made all of the typical first year errors, I partied too much and was more interested in the social aspects of university than the academic ones. I was on academic probation for while until I suffered a debilitating back injury. I would get these horrible pains running down my back to my legs where my friend would have to carry my books for me because it was just too painful to both walk and carry a load.

“I went home for Christmas and had made an appointment to see my chiropractor who sent me to the doctors immediately. That resulted in a costly MRI where they found that I had four herniated discs in my back and osteoarthritis levels of a 70-year who had worked hard, manual labour their whole life. One disc was so destroyed the physician told me I was one sneeze away from being paralyzed.

“The spinal surgery and recovery process took months so in order to get healthy, I had to drop out of school. During this time, my girlfriend at the time and I broke up and as we lived together, this left me homeless. On top of it all, I’d become dependent on the pain medication that I was prescribed. My friends that I’d made when I started university had all graduated by this point. I was alone and in a pretty low place.

“Getting healthy and dropping weight to help my back through the rehabilitation as best as I could became my focus over the summer. I’d pulled myself off my pain medication, a little quicker than I should have, but I was just so tired of not being able to think straight. It was around this time an old friend made a huge impact on my life and it was the change he’d gone through that inspired me to push myself forward.

“Curtis was one of my close friends I’d gone through supported learning with. He had moved out east to attend Dalhousie and had gotten involved with a fraternity. Since pledging, Curtis had learned and grown so much because of the help and support he’d received from his fraternity. It was enough to convince me to pledge at the U of L’s Kappa Sigma chapter.

“Things really looked up for me from that point. I’d pulled my GPA up to the high three’s, I’d been elected as an SU Arts & Science representative and I’d made some strong connections. One of those connections was my mentor at the fraternity, Royal Adkin (VP Operations & Finance, ULSU). Royal and I eventually went on to become great friends and roommates. 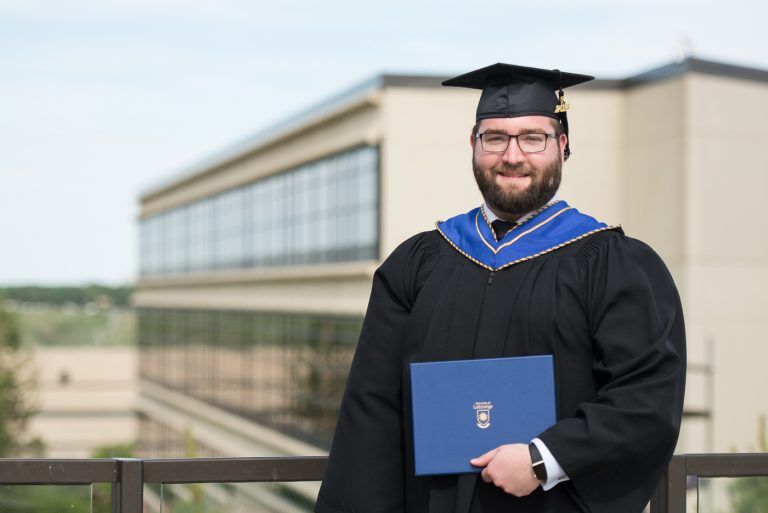 “The following year I’d been elected as the VP of Operations in an SU bi-election which pushed me to do better. I always say, the busier I am, the better I am. I wanted to seek out new challenges and opportunities and I was fortunate enough to be the only student to sit on the Board of Governor’s finance committee in the history of the University. Jodie Gallais (President’s Office) and VP of Finance & Administration, Nancy Walker (BMgt ’82) took the time to listen to why I wanted to be involved and took it to the President’s Executive. I then interviewed with the Chair of the finance committee, Harvey Labuhn, who appointed me to the committee.

“In the spring of last year, Royal and I were attending an alumni function in Calgary when we received a call that our house was in flames. Our roommates, Royal and I, along with two other families in neighbouring homes, lost everything. All I had was the suit I was wearing, my license, my credit card, my phone and the eye-contacts I had in. I had to wear those contacts for weeks because I couldn’t afford to replace my glasses or get new ones.

“Losing everything you own is an out-of-body experience. We watched our house burn to nothing until we checked into a hotel in the early hours of the following morning. I couldn’t submit papers that were due because I didn’t have my computer or any of my work and notes. You feel like you’re bound with an invisible rope and prevented from doing anything, because you literally have nothing.

“The silver-lining in the fire was the incredible community we’d become so involved in. The local community and the University community stepped in and helped us in the most generous of ways. Royal and I along with our two other roommates were able to stay in residence for a few weeks while we finished finals and looked for a new home. We received so many clothing donations and food donations that we were overwhelmed with where to start sorting through everything. 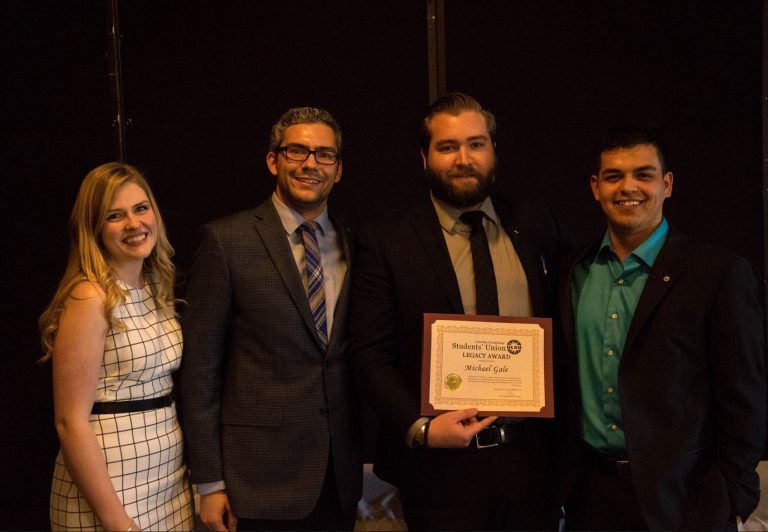 “One year on and I’ve just taken those final, defining steps across the stage in front of my family and friends and fellow students. I’ve experienced so much at the U of L and have grown exponentially. I chose to come here because of the independence I’d have from what I’d always known and now I don’t want to leave the community because I’m a deeply engrained part of it. I am excited to move on to the next chapter in my life and get out in the work force, finding a place where I can continue to give back and make a difference.”

As the program coordinator of science outreach program, Destination Exploration, Laura sees the light flick on in many young minds as she helps them unlock the door to discovery in the world of science.

One man who is especially thrilled to see convocation coming, is Dr. Olu Awosoga (Health Sciences).